After landing at the Marco Polo Airport we (my Mom and I) eventually made it onto a bus headed for Venice. It took us a while, lugging our baggage over two large bridges across the Grand Canal, but we eventually found the hotel which was on a smaller canal.

Our hotel – the Residence Palazzo Odoni had a cute little courtyard after the door entrance. Took us awhile to figure out how to get through the door though as we were a bit early for check-in and didn’t yet have a special key. I appreciated that this offered additional security to the hotel though. Lots of steps but huge rooms with kitchen and living room/dining area. The smaller Rio Novo canal outside our hotel with several gondoliers, one which was singing as they passed by. 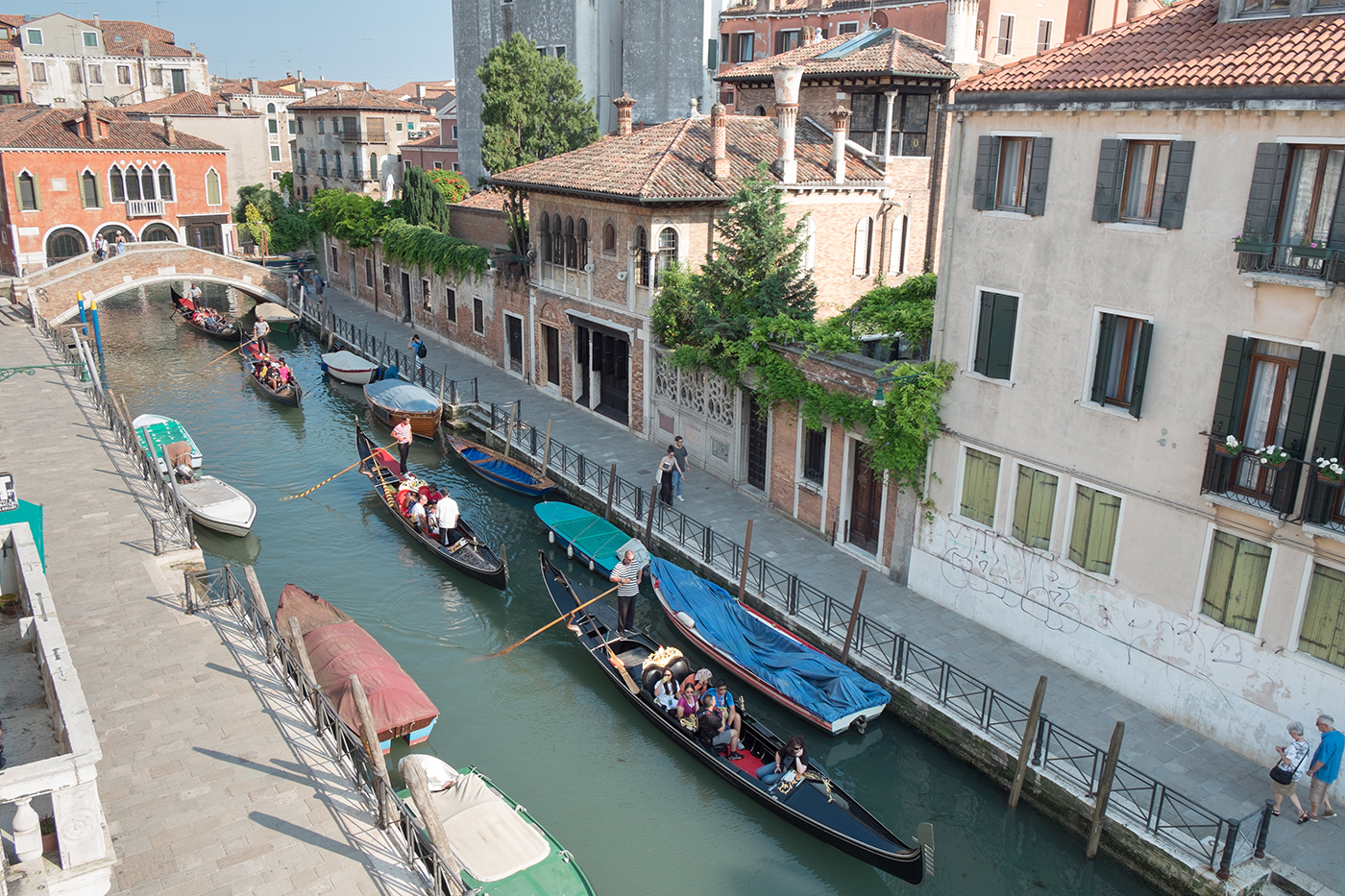 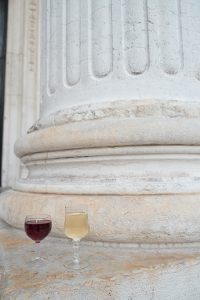 After checking in we decided to head out and explore. We found the train station for the next leg of our trip and then began walking around the alleyways of Venice. For our first dinner we chose Trattoria da Silvio for its garden dining area. Pasta with prawns for mom (they had eyes, ew!) and plain noodles for me. The complimentary Limoncello at the end of dinner didn’t win Mom over so we went to Bacareto da Lele for wine and sat on nearby steps to relax and take it all in.

The next day was our day to get lost in the alleys of Venice. We crossed the Grand Canal to the outer area, walked our way around, then across the Rialto bridge to stop for lunch and to give our feet a little rest. We searched for basilicas to visit though found some were not open. In the evening we went on a gondola ride and then a ridiculously decadent dessert afterwords. Another amazing day!

Located in the sestiere of Cannaregio, this church is devoted to the relics, including the remains, of Santa Lucia (Saint Lucy) the patron saint of Syracuse (Sicily). She was a young Christian martyr who died during the Diocletianic Persecution and is one of the few saints celebrated by the Lutheran Nordic people.

It is the oldest bridge across the canal, and was the dividing line for the districts of San Marco and San Polo. It is a single span marble bridge designed by Antonio da Ponte and it was completed in 1591. While we were there it was undergoing construction/restoration. 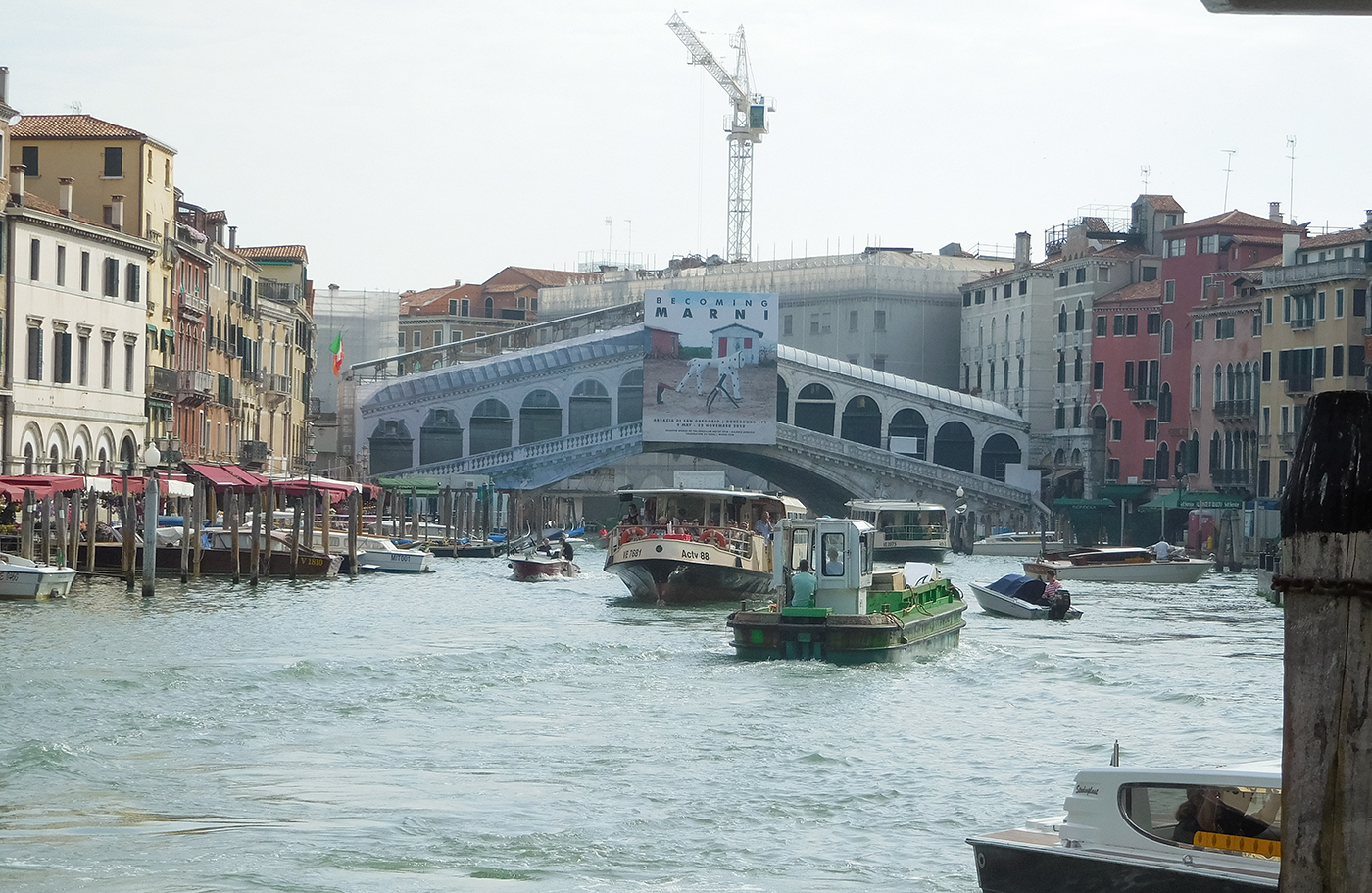 One of the greatest churches in the city, it has the status of a minor basilica. It stands on the Campo dei Frari at the heart of the San Polo district. The Franciscans were granted land to build a church in 1250. The campanile, the second tallest in the city after that of San Marco, was completed in 1396. 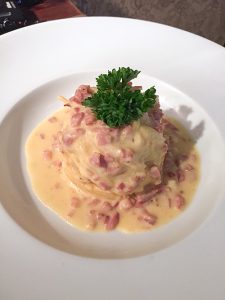 At Impronta Cafe my Mom ordered Spaghetti Carbonara (Mom’s absolute favorite dinner of the whole trip), chicken & fries for me (their water glasses were made of Murano glass, so beautiful!) 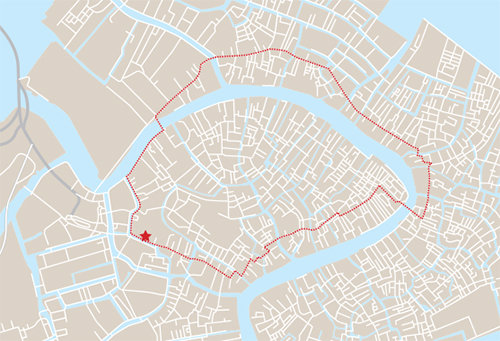 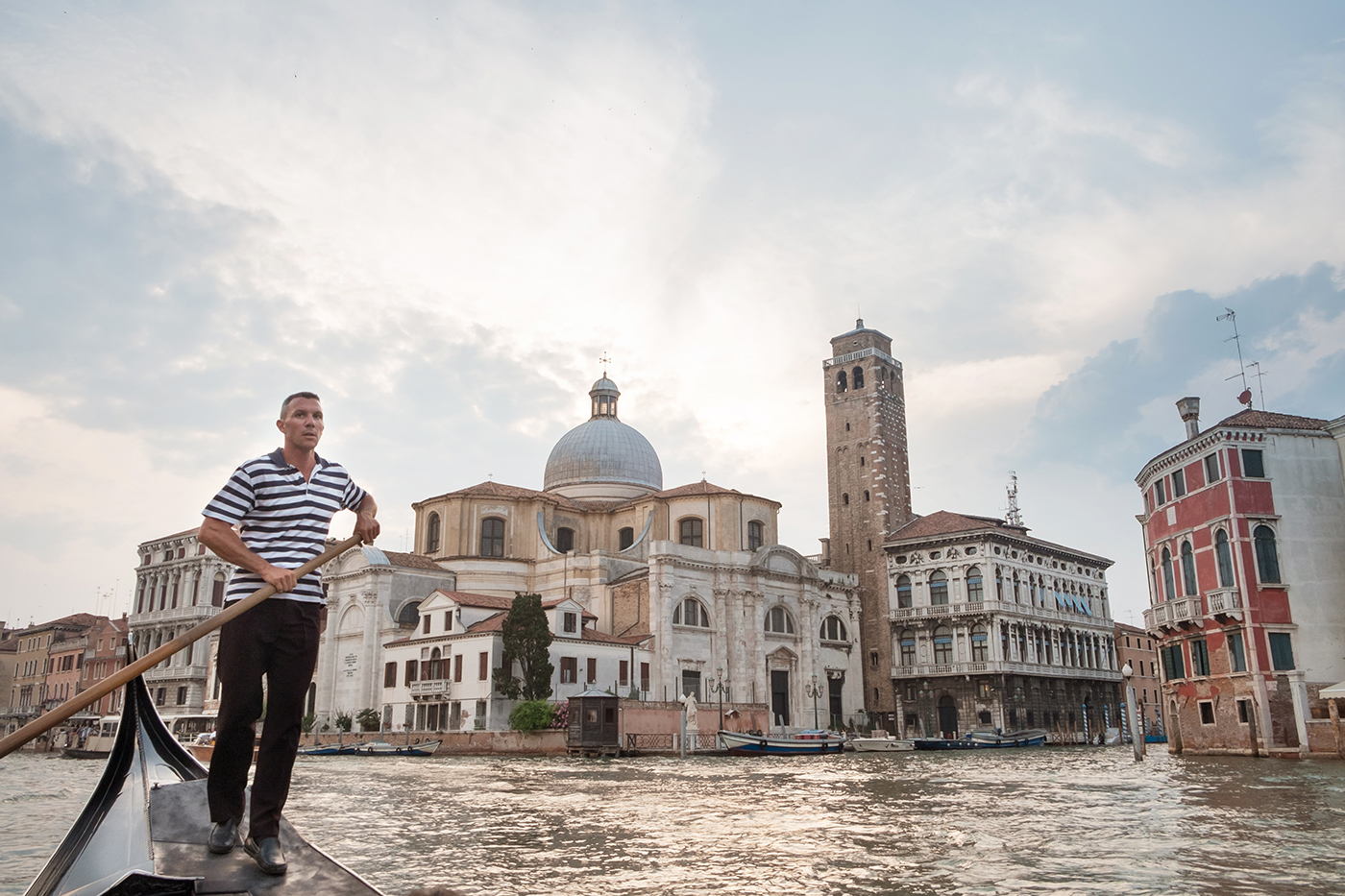 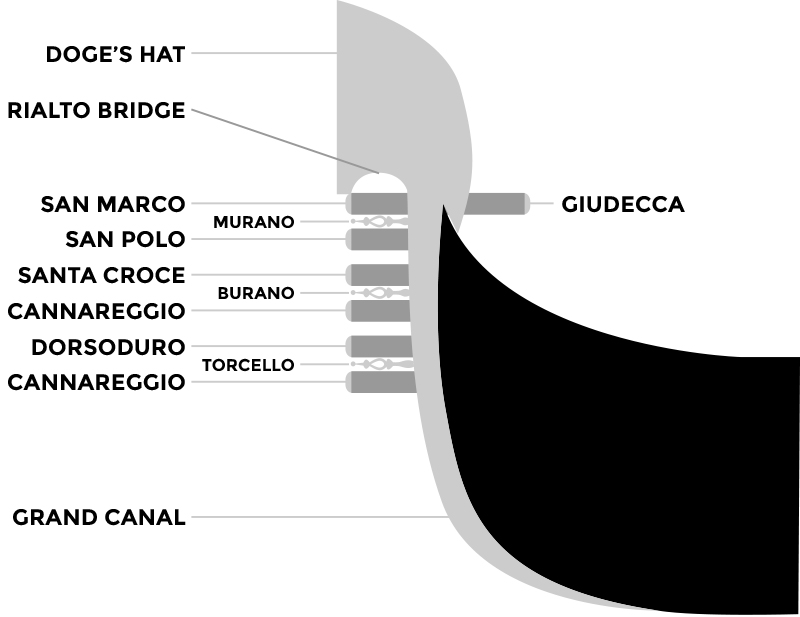 The gondola is a traditional Venetian rowing boat, driven by a gondolier with the rowing oar used in a sculling manner, also acting as the rudder. The gondola has gone through many modifications from the elegant black ones of today. Popular tradition says the decoration on the front, the ferro, has an S-shaped curve echoing the shape of the Grand Canal. The curved top signifies the Doge’s hat and semi-circle underneath, the Rialto Bridge. Six prongs represent Venice’s six sestieri, or districts, and the prong facing backwards is for Giudecca, an island just south of the main Venetian island. Sometimes three friezes appear between the prongs, indicating the islands of Murano, Burano and Torcello. 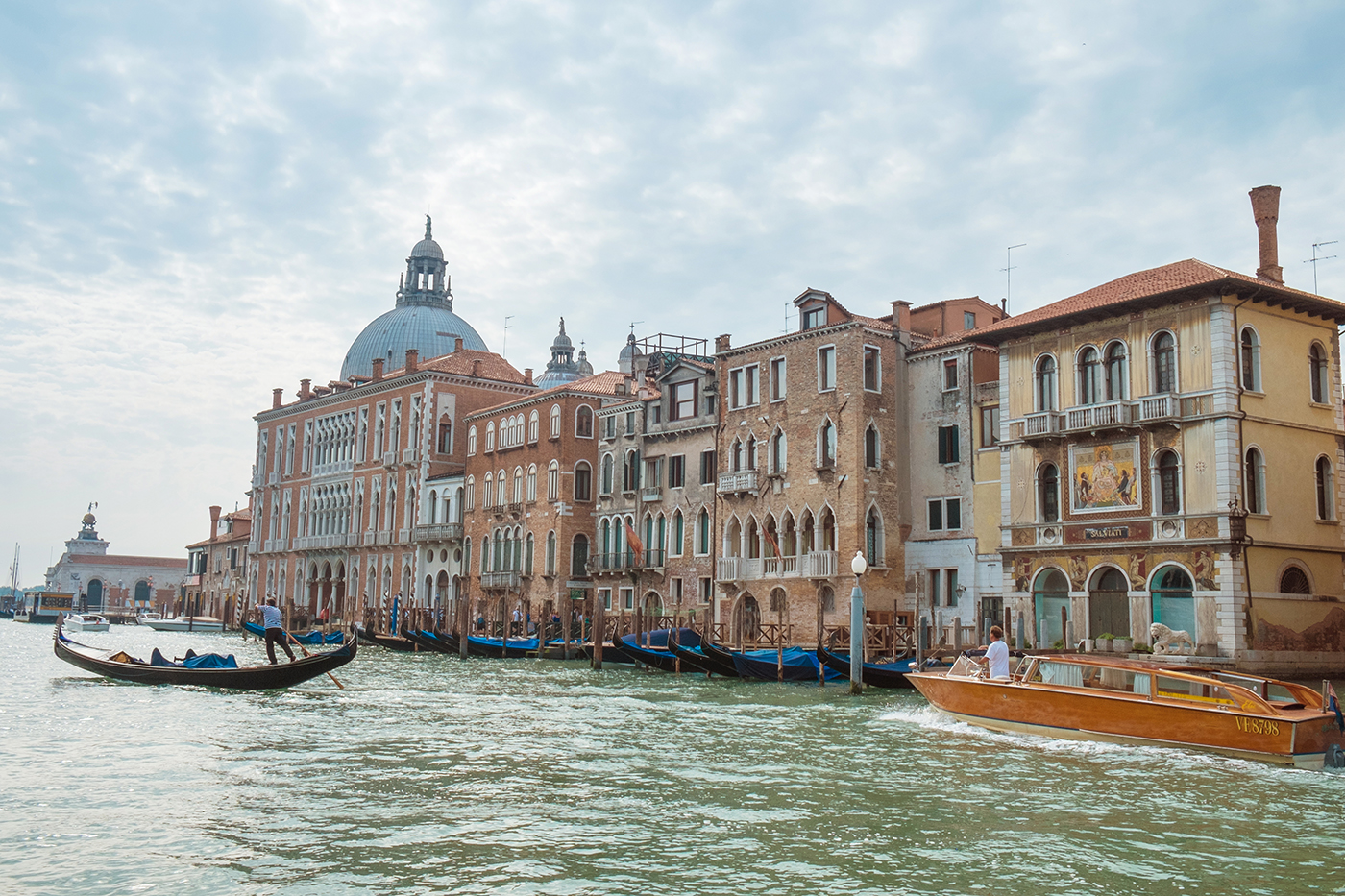 We took the vaparetto (water bus) to St. Mark’s Square in the morning and then explored from there. Since it would be awhile before our evening tour we took the vaparetto around to visit a few places that looked interesting. We ate and then headed back to the square for our incredible after hours tour of Doge’s Palace and St. Mark’s Basilica.

An interesting and beautiful church. As a votive offering for the city’s deliverance from the pestilence of the 1630 plague, the Republic of Venice vowed to build and dedicate a church to Our Lady of Health (Santa Maria della Salute). 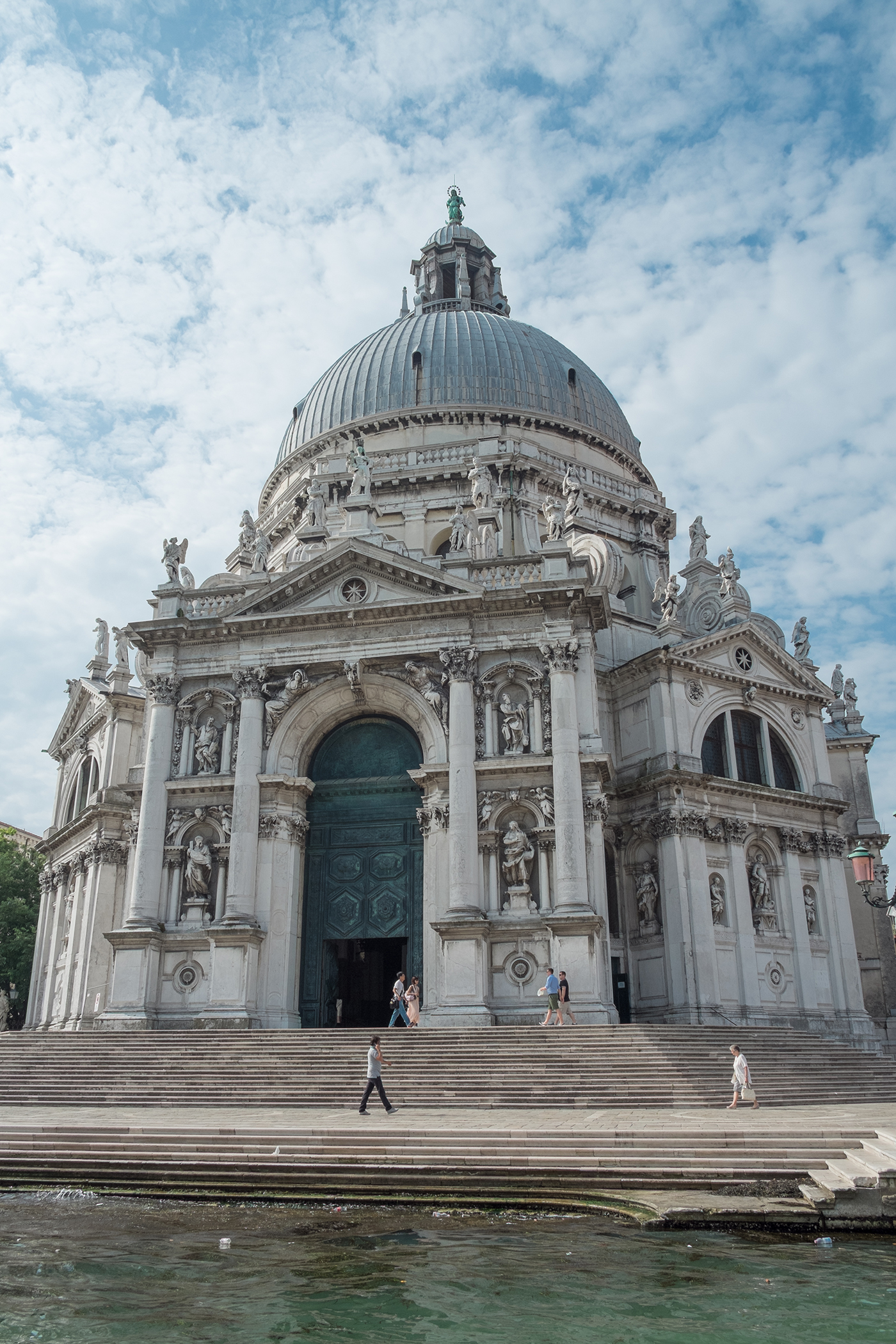 This church was built between 1566 and 1610 in the classical renaissance style, its white marble gleams above the lagoon. (shown right) 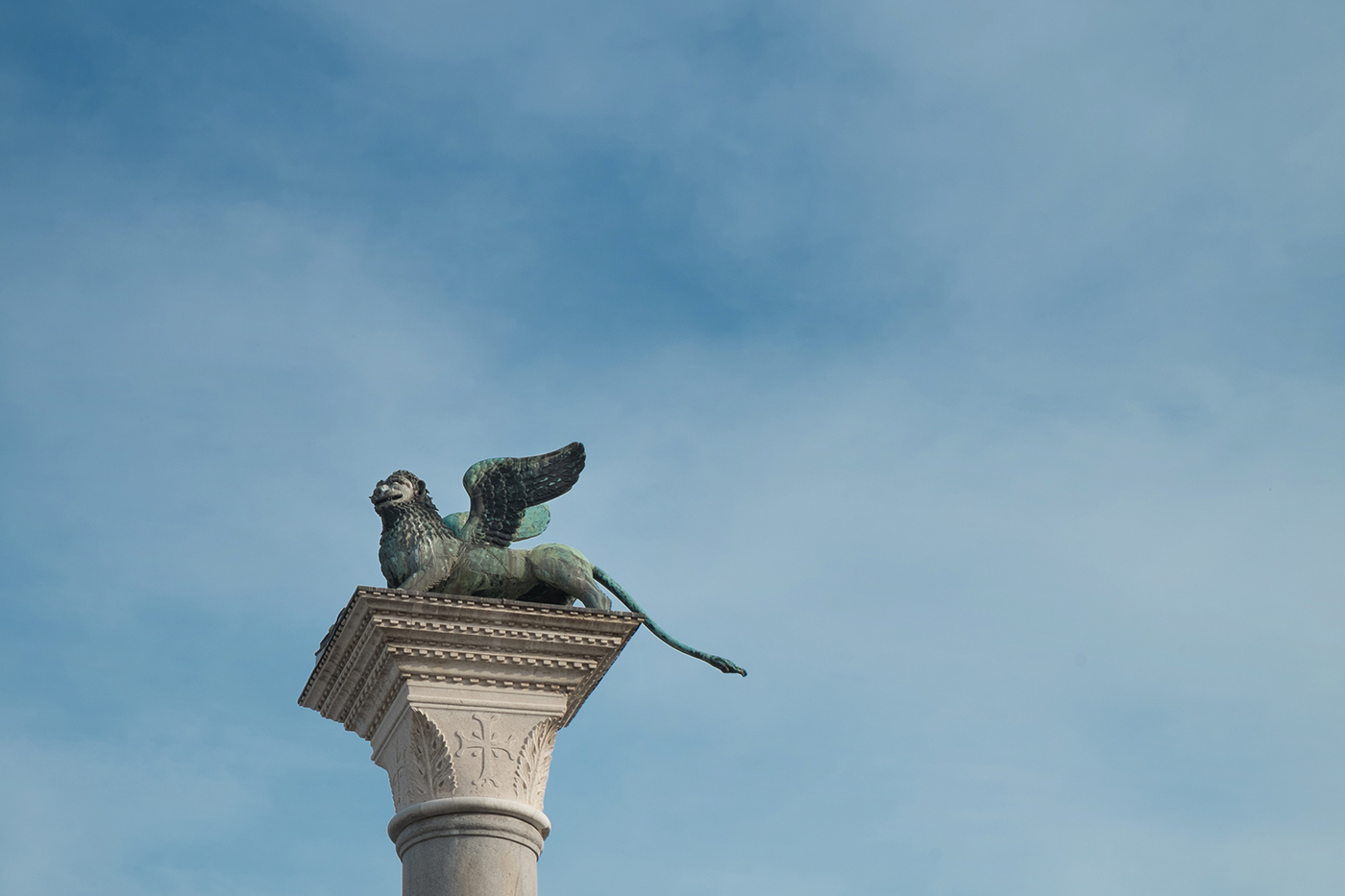 A symbol that you simply can’t get away from in Venice is the winged lion. But here’s the big question: Why a lion for the maritime republic, and not a fish or seagull?

Venetian tradition states that when St. Mark was traveling through Europe, he arrived at a lagoon in Venice, where an angel appeared to him and said “May Peace be with you, Mark, my evangelist. Here your body will rest.” This was used as justification by Venetian merchants for stealing the remains of St. Mark from his grave in Alexandria, Egypt and moving them to Venice, where they were eventually interred in the Basilica of St. Mark. In Christian iconography, a winged lion is used to represent St. Mark.

The Lion of Venice, is an ancient bronze winged lion atop the Colonna di Marco in the Piazzetta di San Marco. The space between the two columns (Colonna di Marco and Colonna di Teodoro) which guard the water’s edge used to be a spot for public executions, and therefore considered by locals to be bad luck to walk between them. 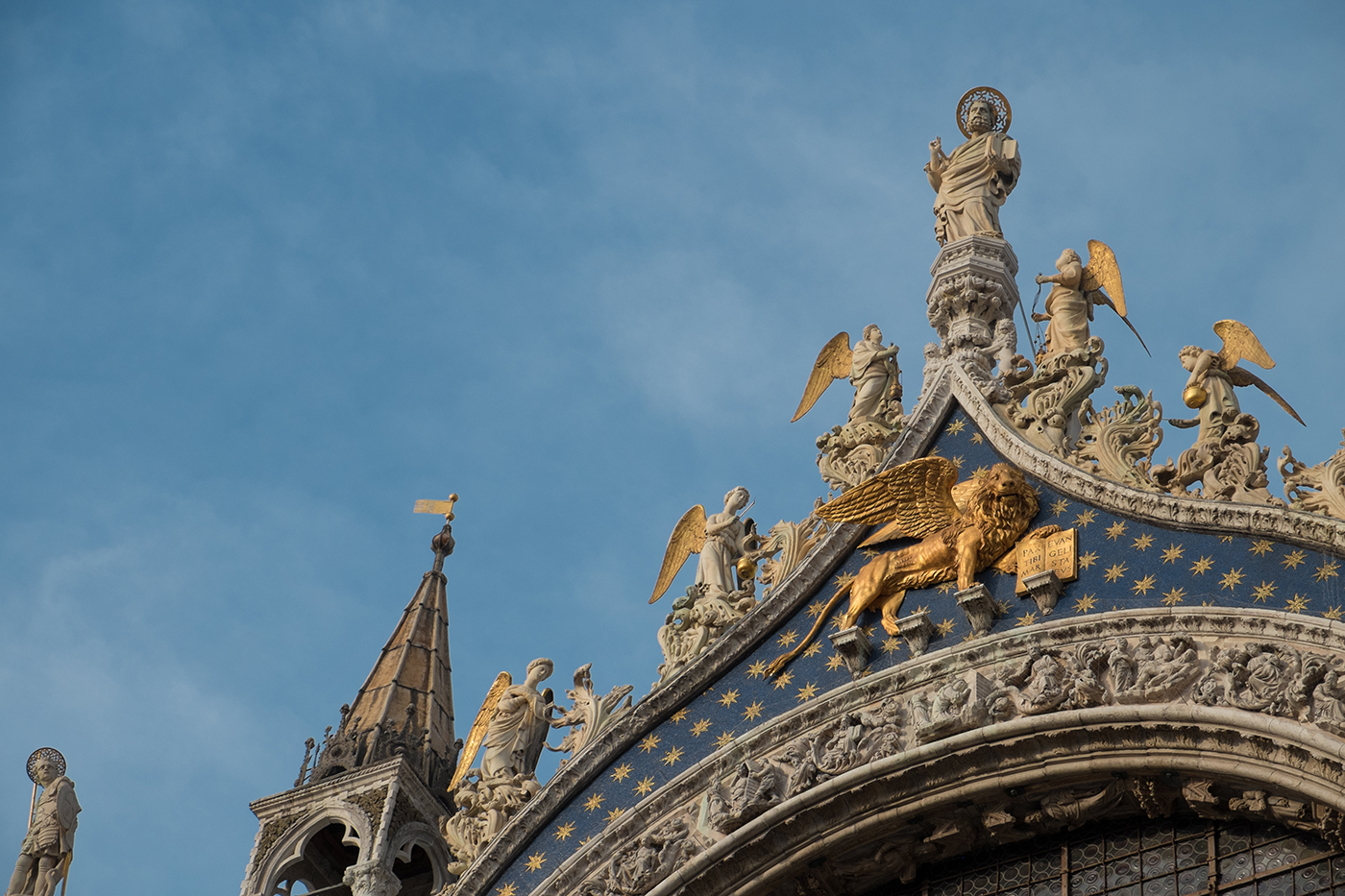 We booked the exclusive alone in St. Mark’s Basilica & Doge’s Palace tour through Walks of Italy. We first met at the Doge’s Palace when it was closing so there were only a handful of people still there. As we stood in the virtually empty courtyard I imagined that just an hour before it was probably packed with a sea of tourists. It certainly made our trip memorable to have this VIP experience.

A masterpiece of Gothic architecture, the Doge’s Palace was the seat of power for the Venetian Republic – La Serenissima – for centuries. It was the residence of the Doge (the ruler of Venice) and also housed the political bodies of the state, including the Great Council (Maggior Consiglio) and the Council of Ten.

Within the lavish complex, there were law courts, administrative offices, courtyards, grand stairways, and ballrooms, as well as prisons on the ground floor. Additional prison cells were located across the canal in the Prigioni Nuove (New Prisons), built in the late 16th century, and connected to the palace via the Bridge of Sighs. 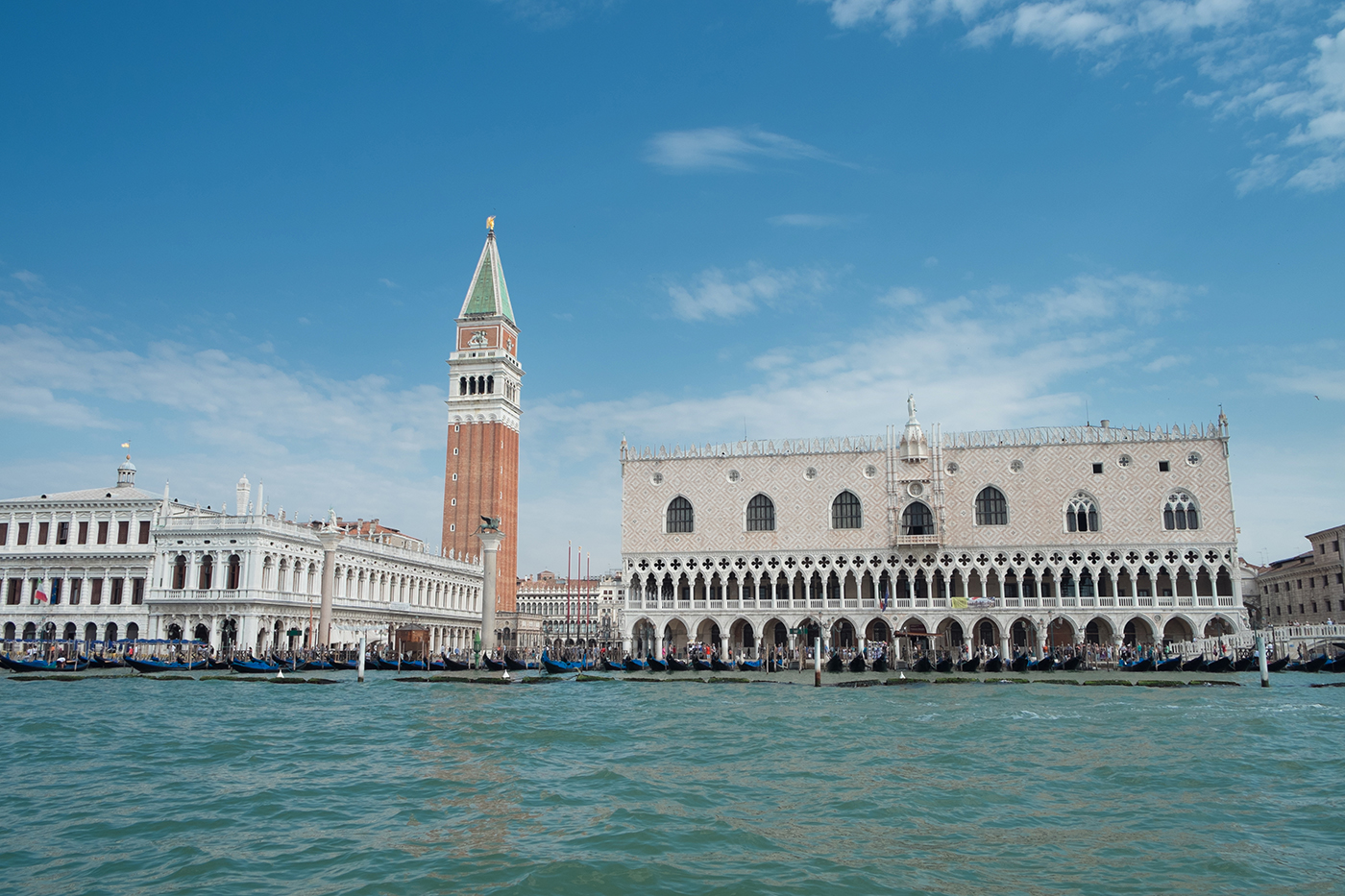 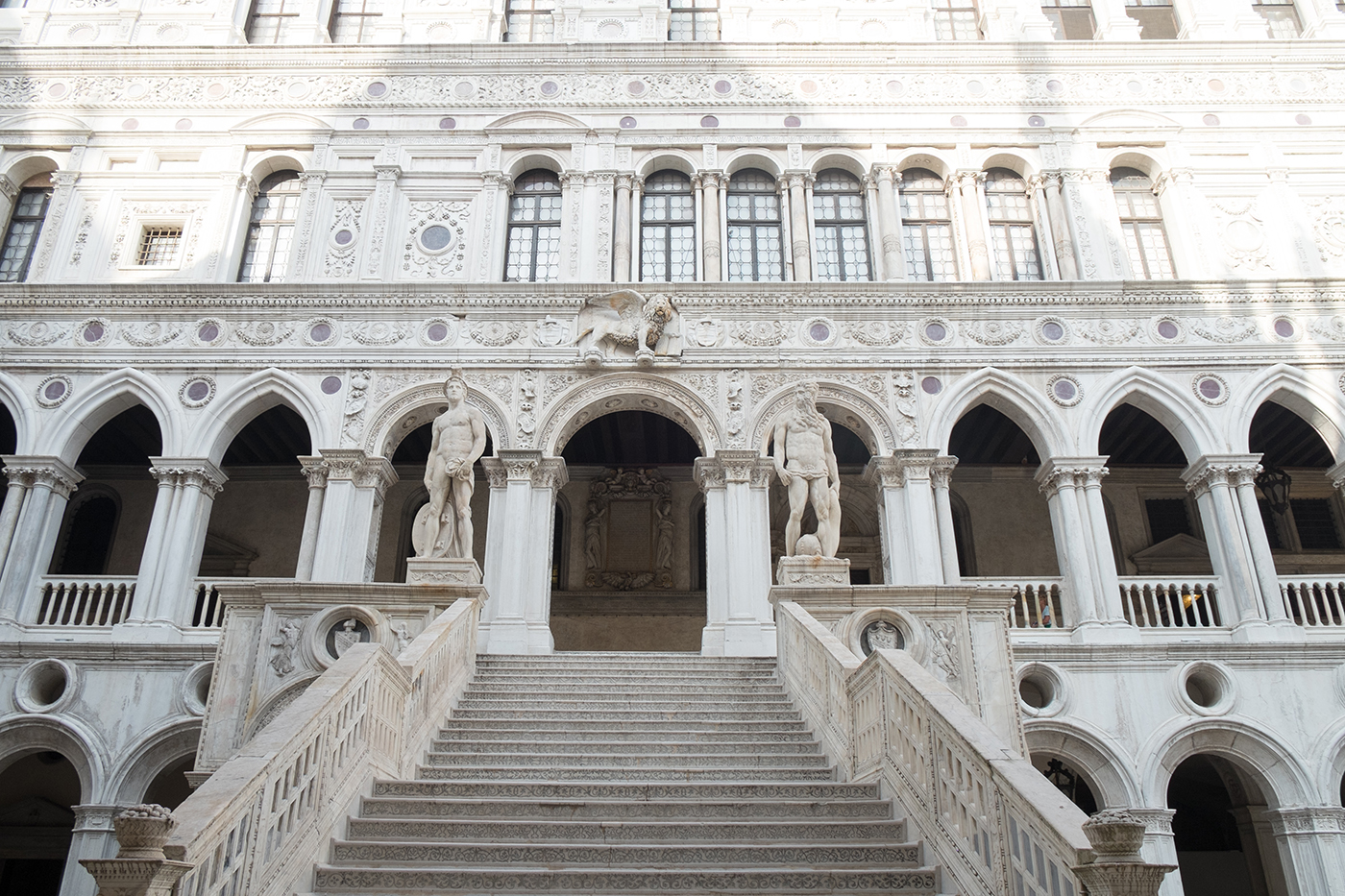 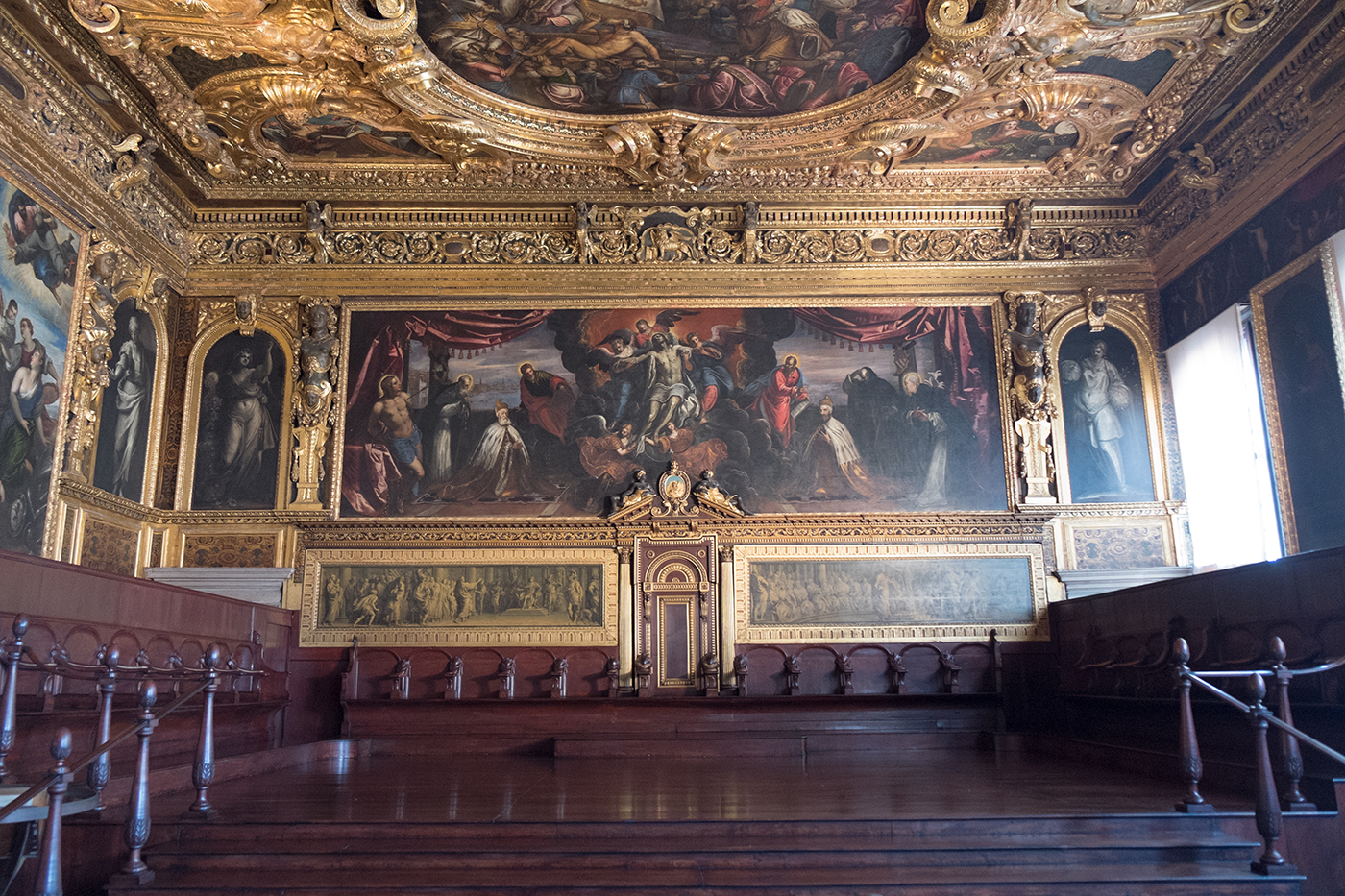 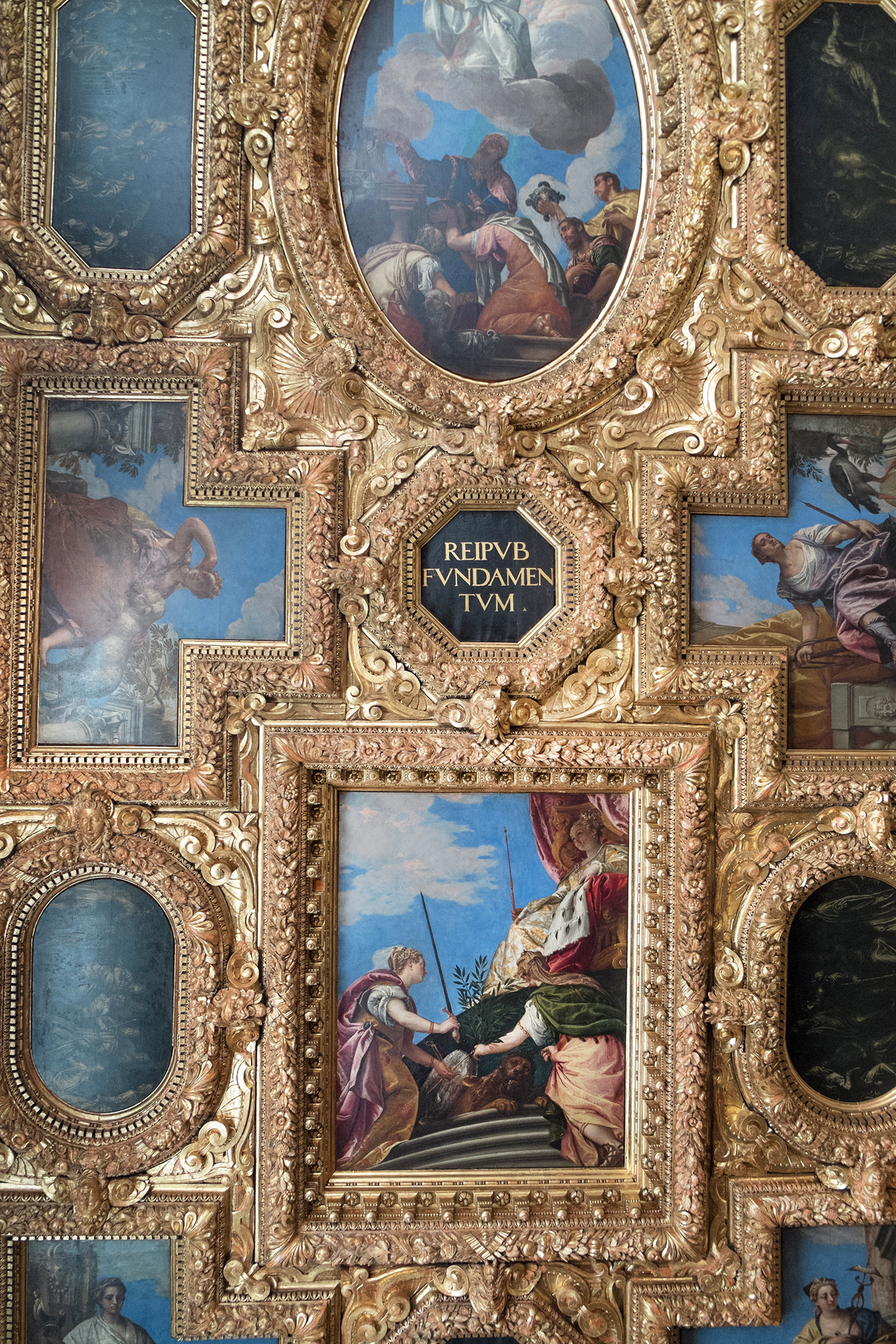 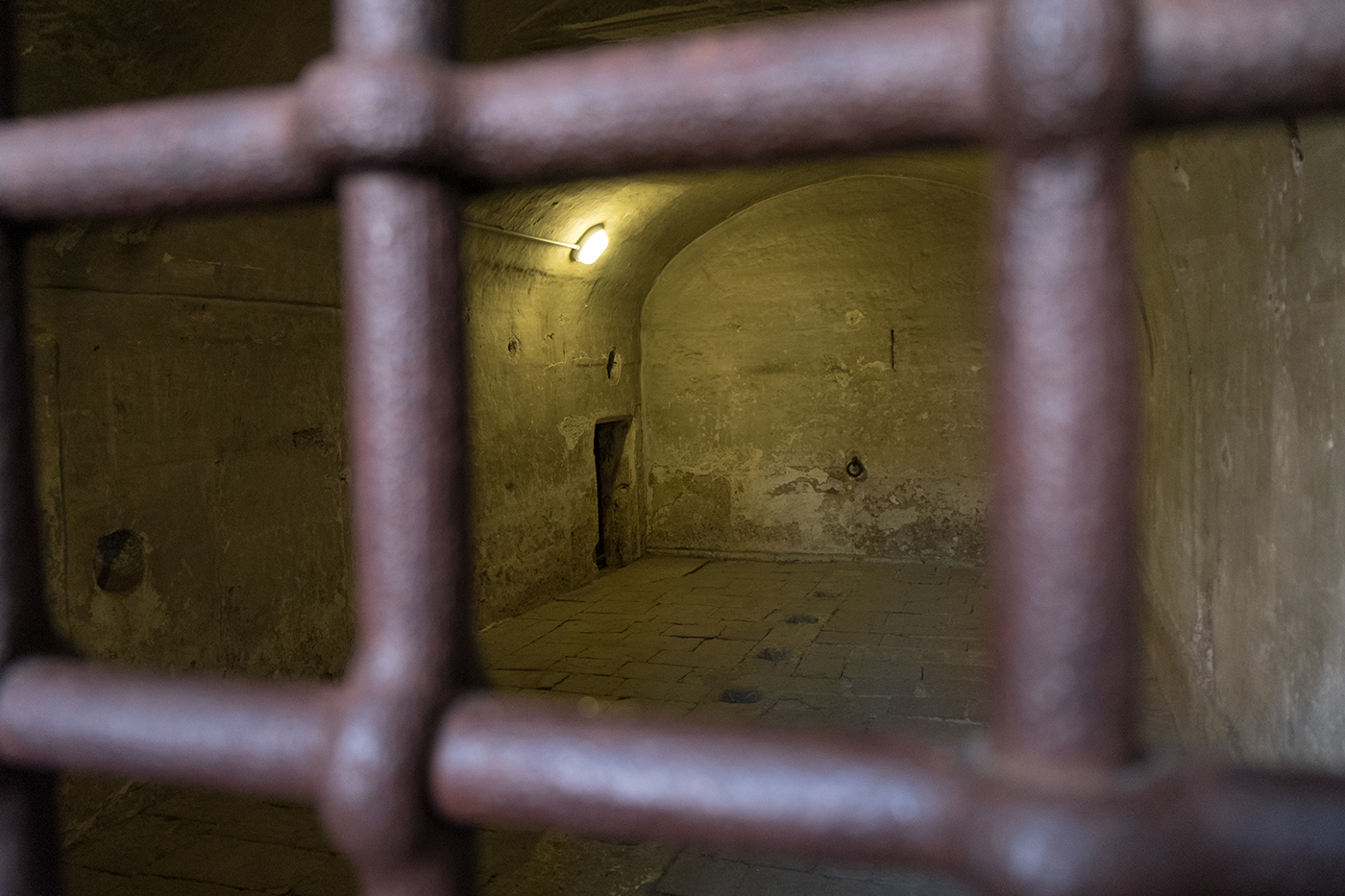 The Campanile di San Marco, the brick bell tower of St. Mark’s Basilica. This was rebuilt after the original Campanile collapsed in 1902. 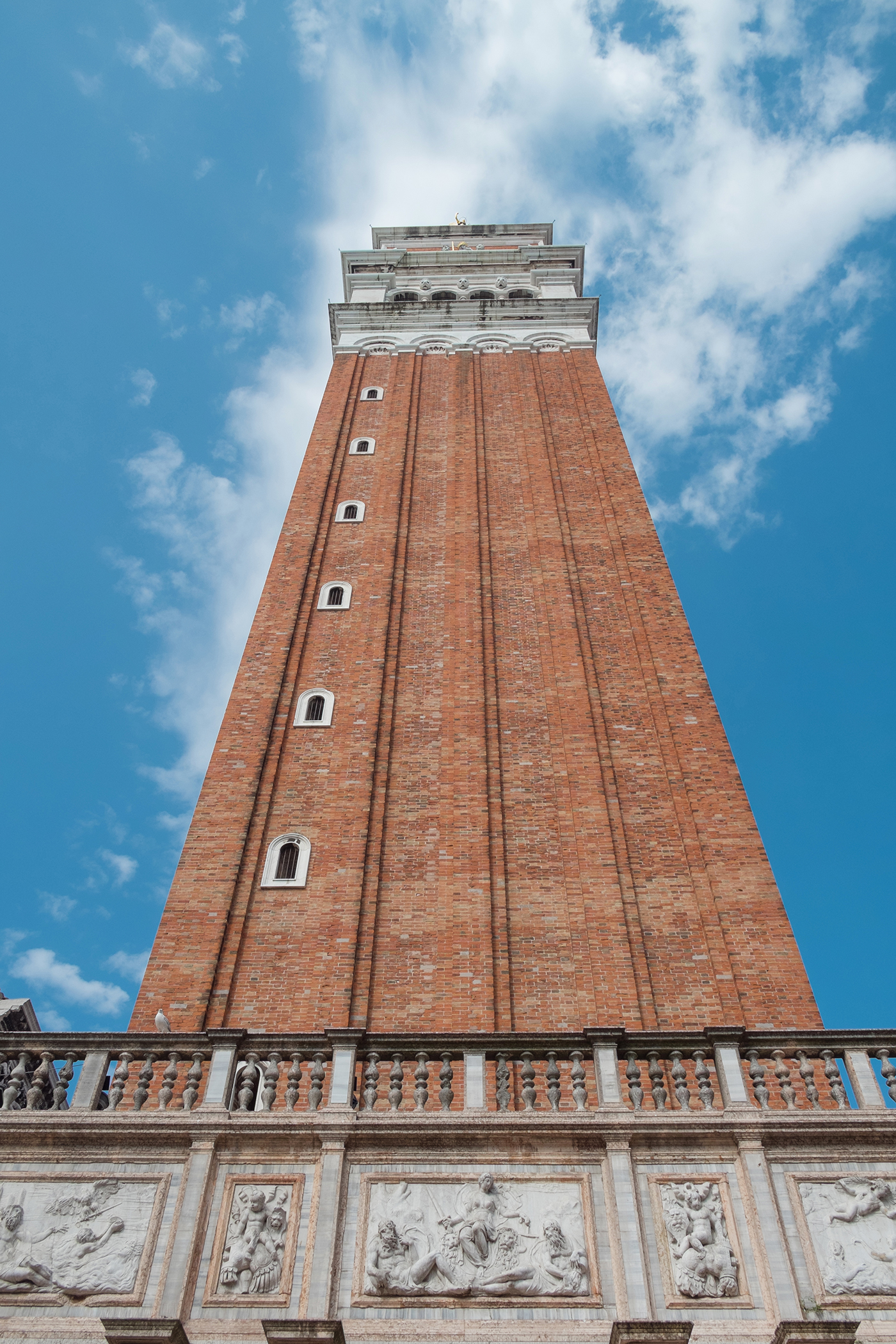 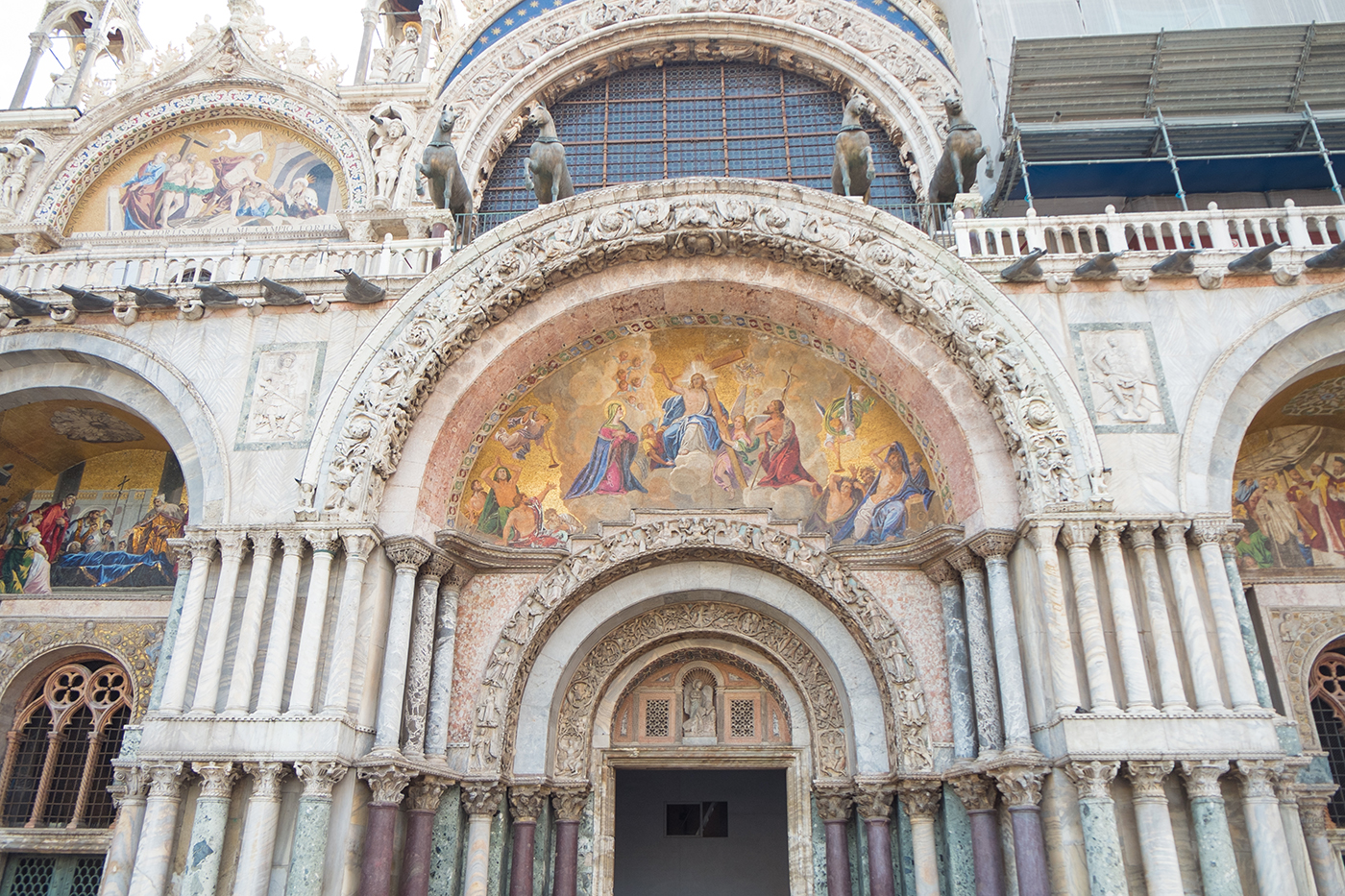 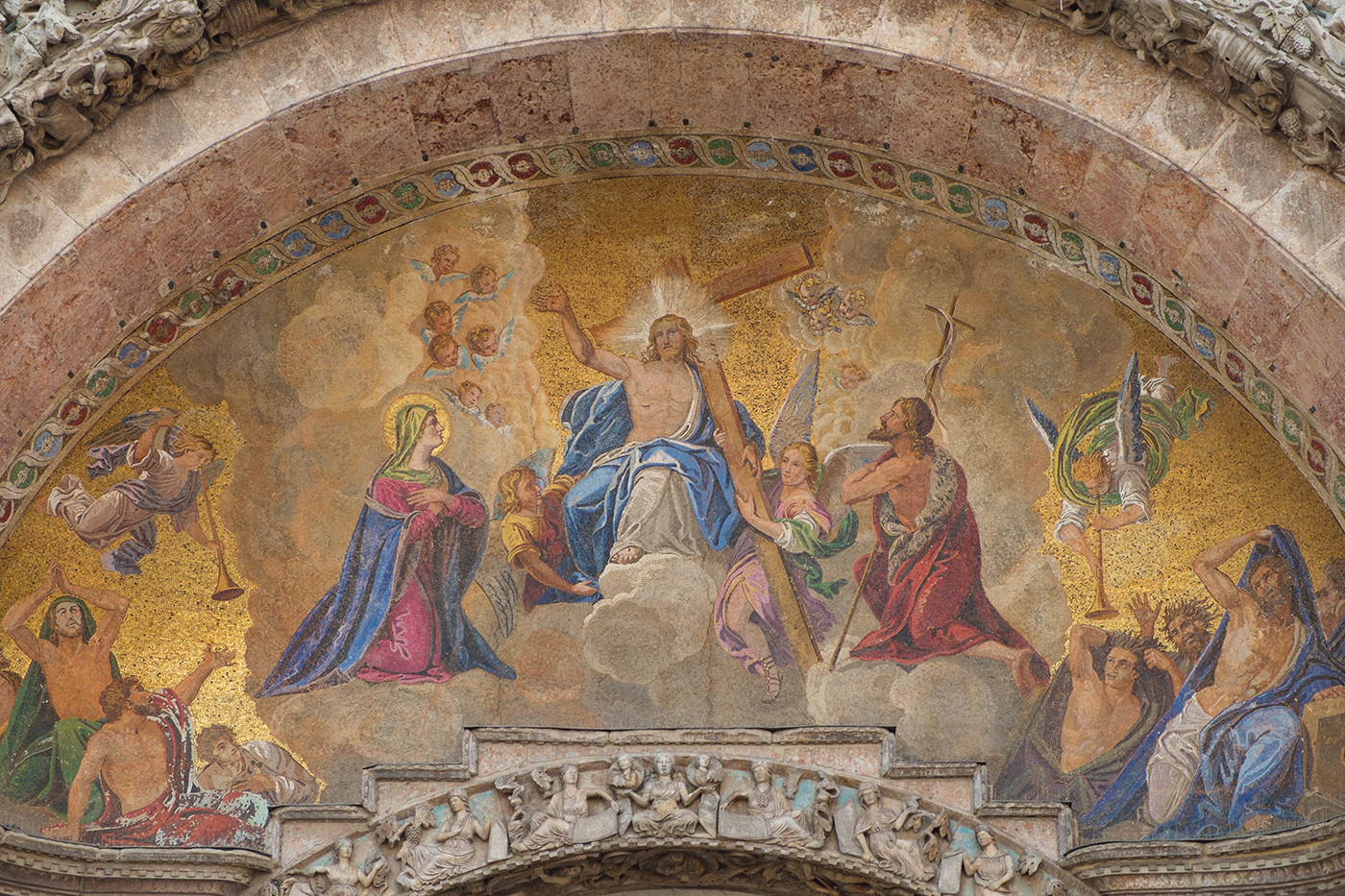 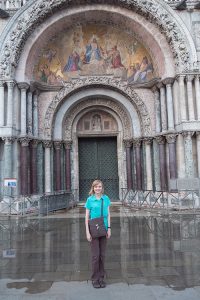 The Patriarchal Cathedral Basilica of Saint Mark is the cathedral church of the Roman Catholic Archdiocese of Venice, northern Italy. It is the most famous of the city’s churches and one of the best known examples of Italo-Byzantine architecture. It lies at the eastern end of the Piazza San Marco, adjacent and connected to the Doge’s Palace. Originally it was the chapel of the Doge, and has only been the city’s cathedral since 1807.

For its opulent design, gold mosaics, and its status as a symbol of Venetian wealth and power, from the 11th century on it was nicknamed Chiesa d’Oro (Church of gold.) There are more than 85,000 square feet of mosaic in St. Mark’s Basilica.

Our Venetian tour guide really made the tour interesting, funny, and incredible. She explained local history and her heritage, the things people say compared to what Venetians believe to be true. We went through the offices, courts, prison, and then it was onto our basilica visit. Our guide was very familiar with all things St. Mark’s, also a member of this church (and where her child was baptized.) We certainly felt like we were getting extra special treatment because she is friends with the guards and happy to extend her a special favor or two.

My favorite unexpected moment
Our guide requested we sit down on the wooden pews and remain silent. Looking above you could see the countless tiles and shimmering gold. She then signaled to illuminate the mosaics. It was a moment that I wasn’t expecting and one that I can never forget. Each scene was meticulously detailed and as I sat there, amongst the incredible artistry of this golden masterpiece, it truly took my breath away. 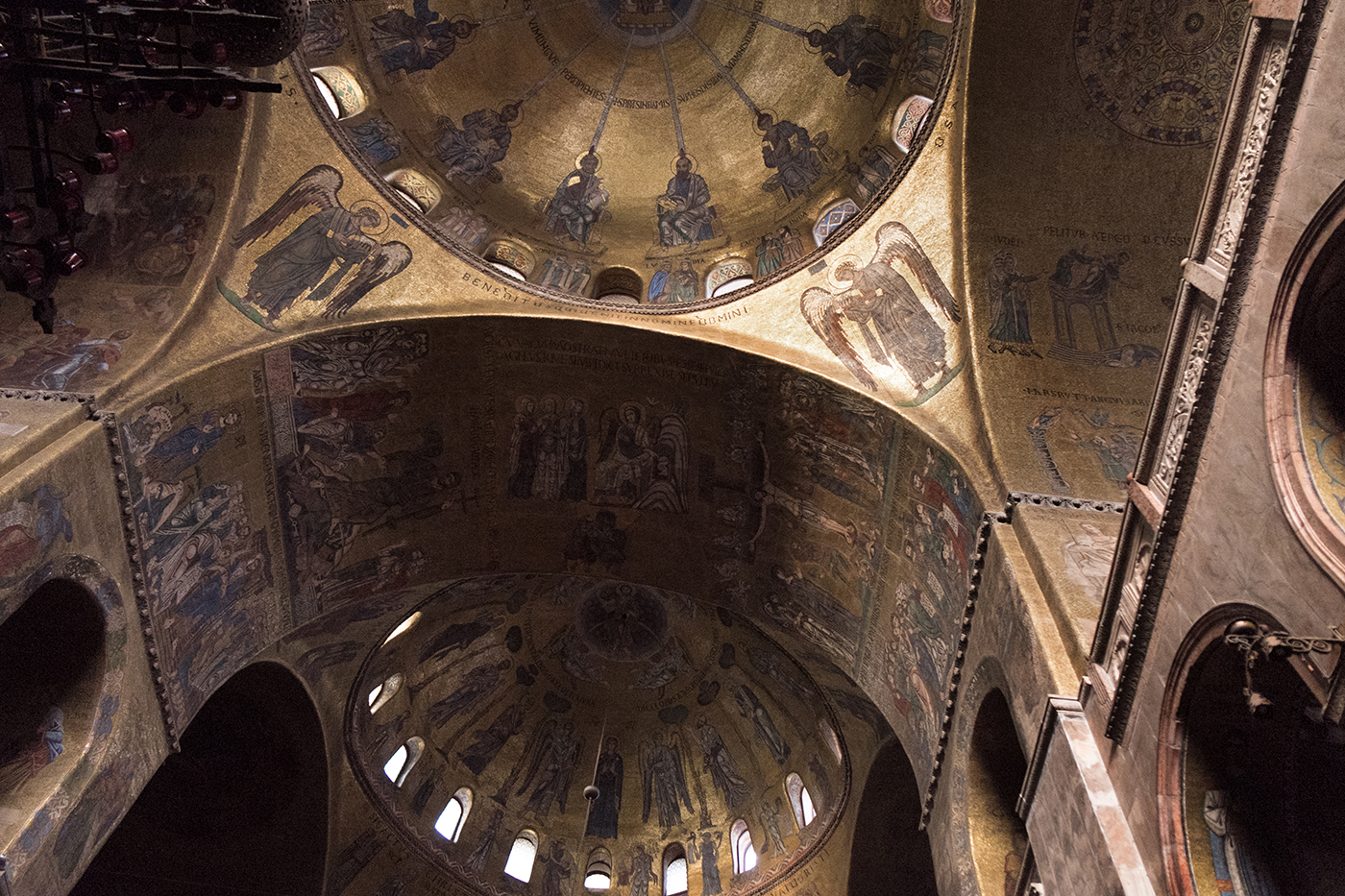 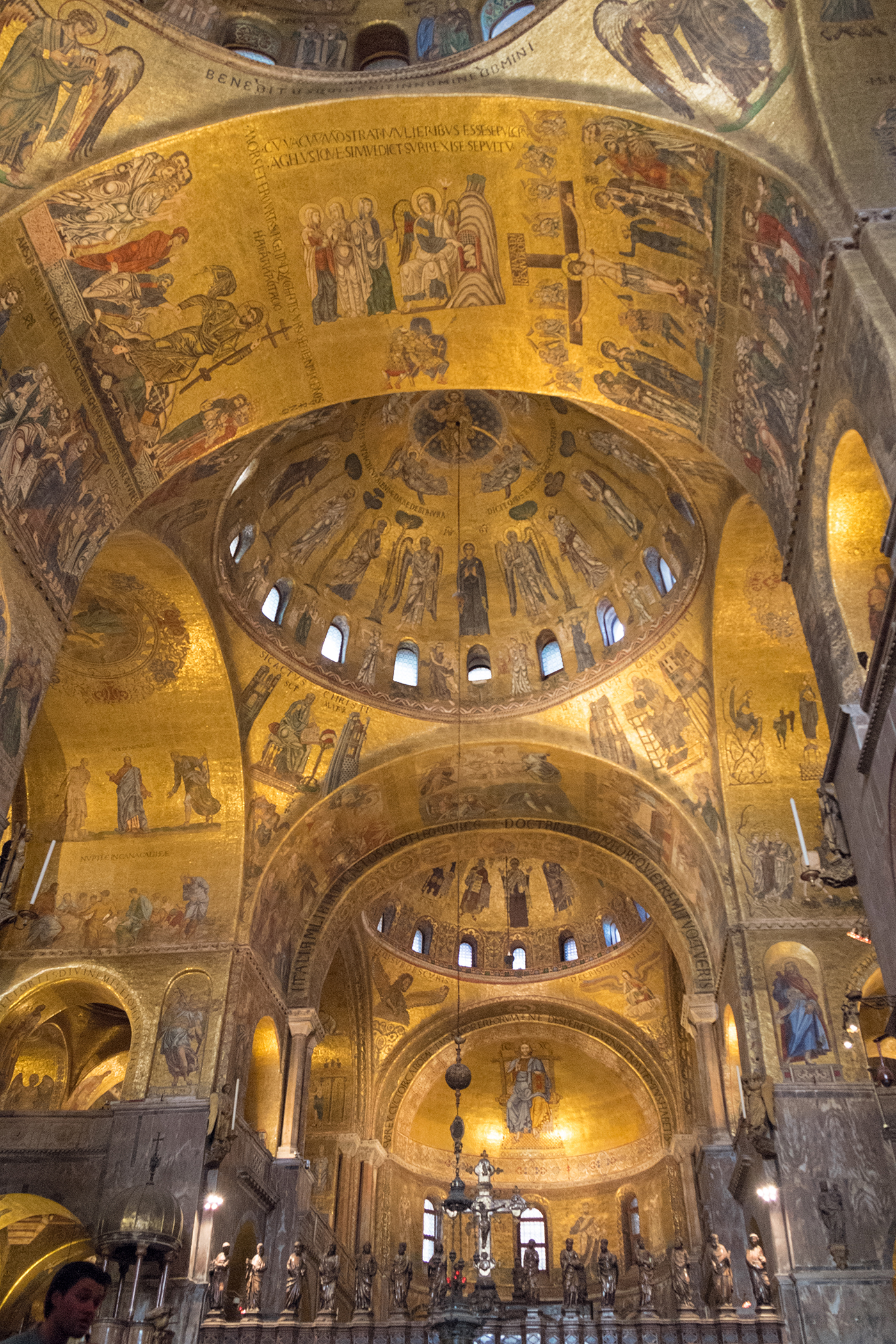 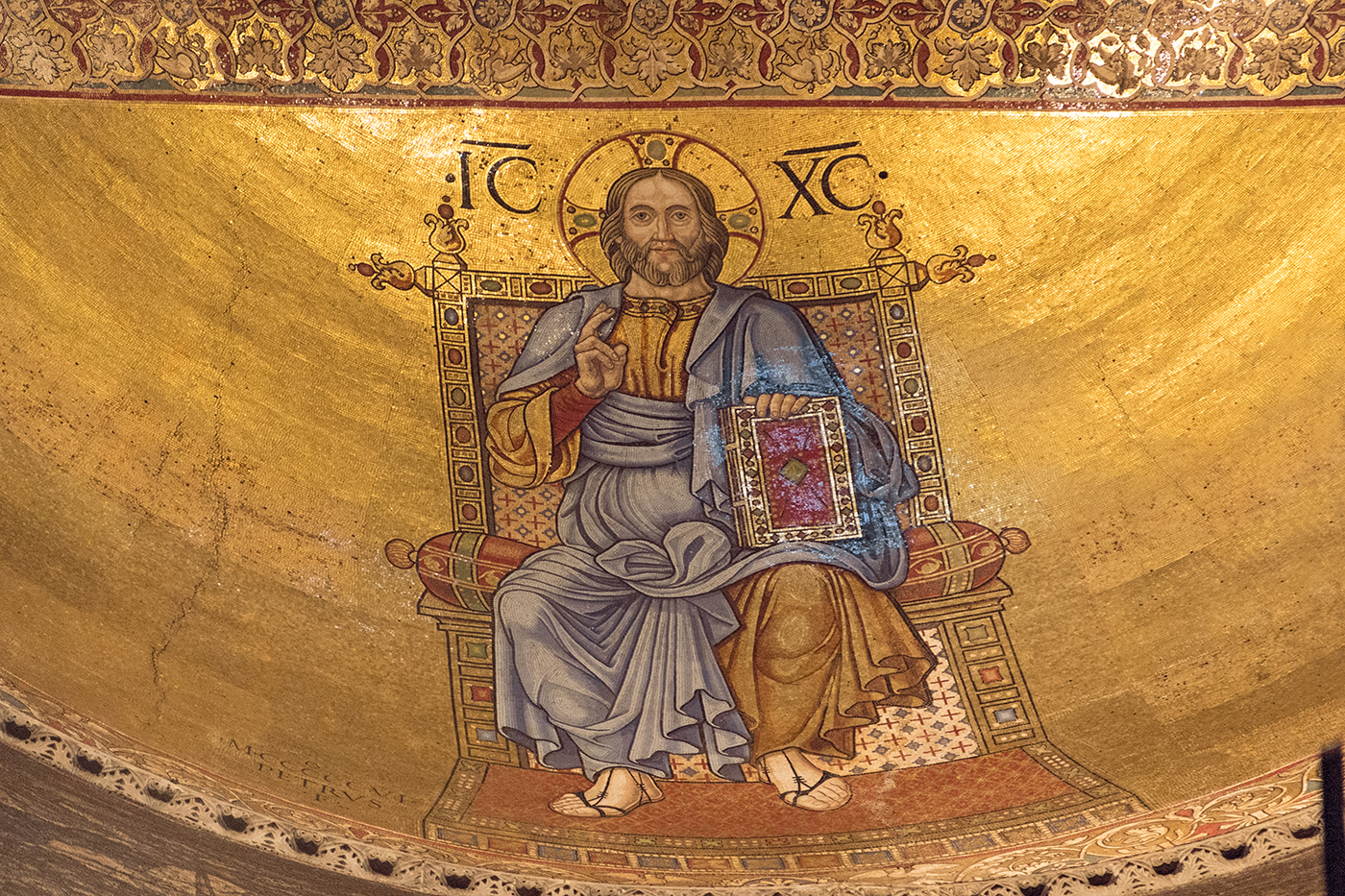 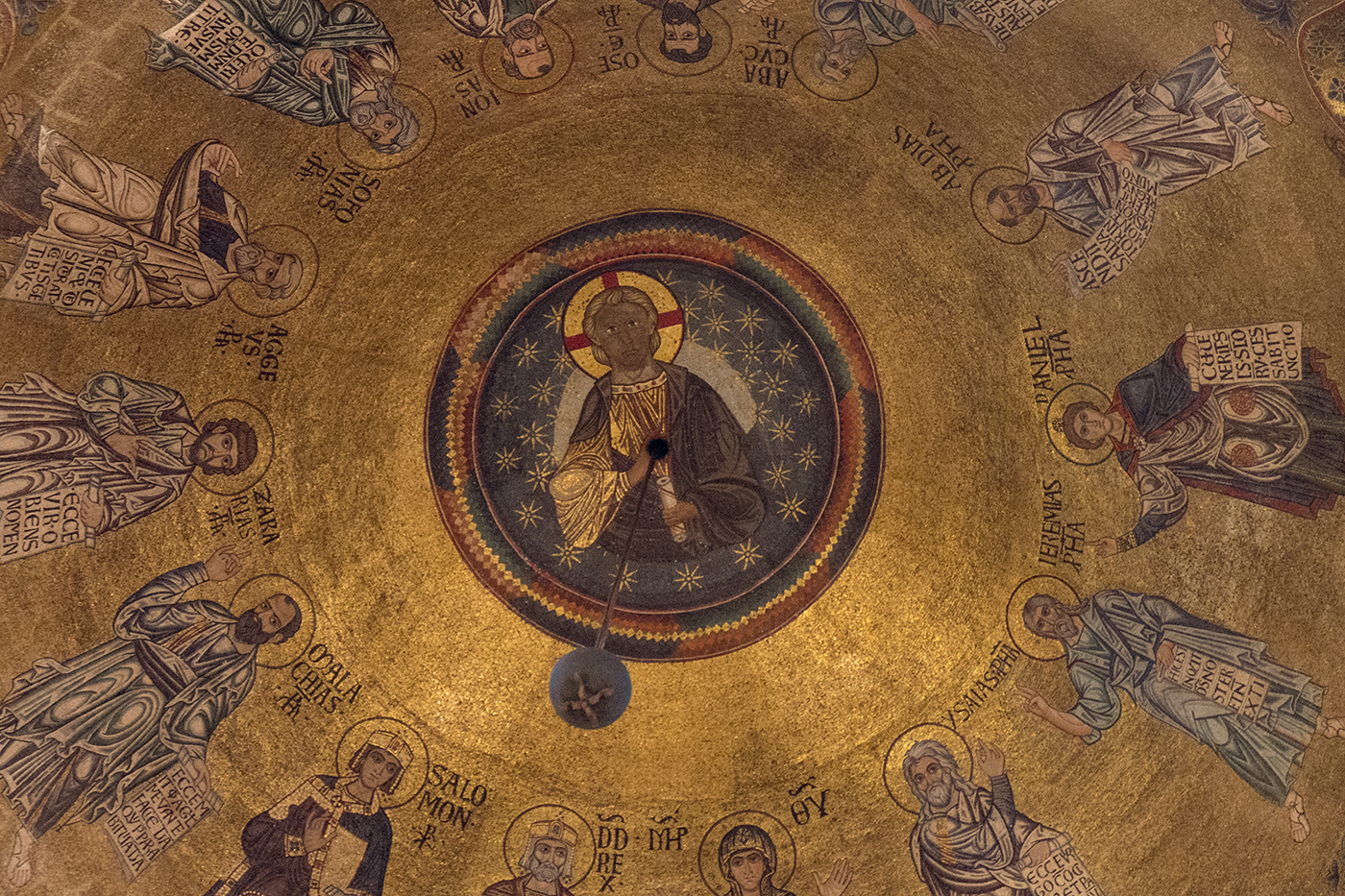 The Pala d’Oro, an altar screen of gold, is studded with hundreds of gems including 1,300 pearls, 300 emeralds, 300 sapphires, 400 garnets, 100 amethysts, rubies and topazes. The interior is based on a Greek cross, with each arm divided into three naves with a dome of its own as well as the main dome above the crossing. 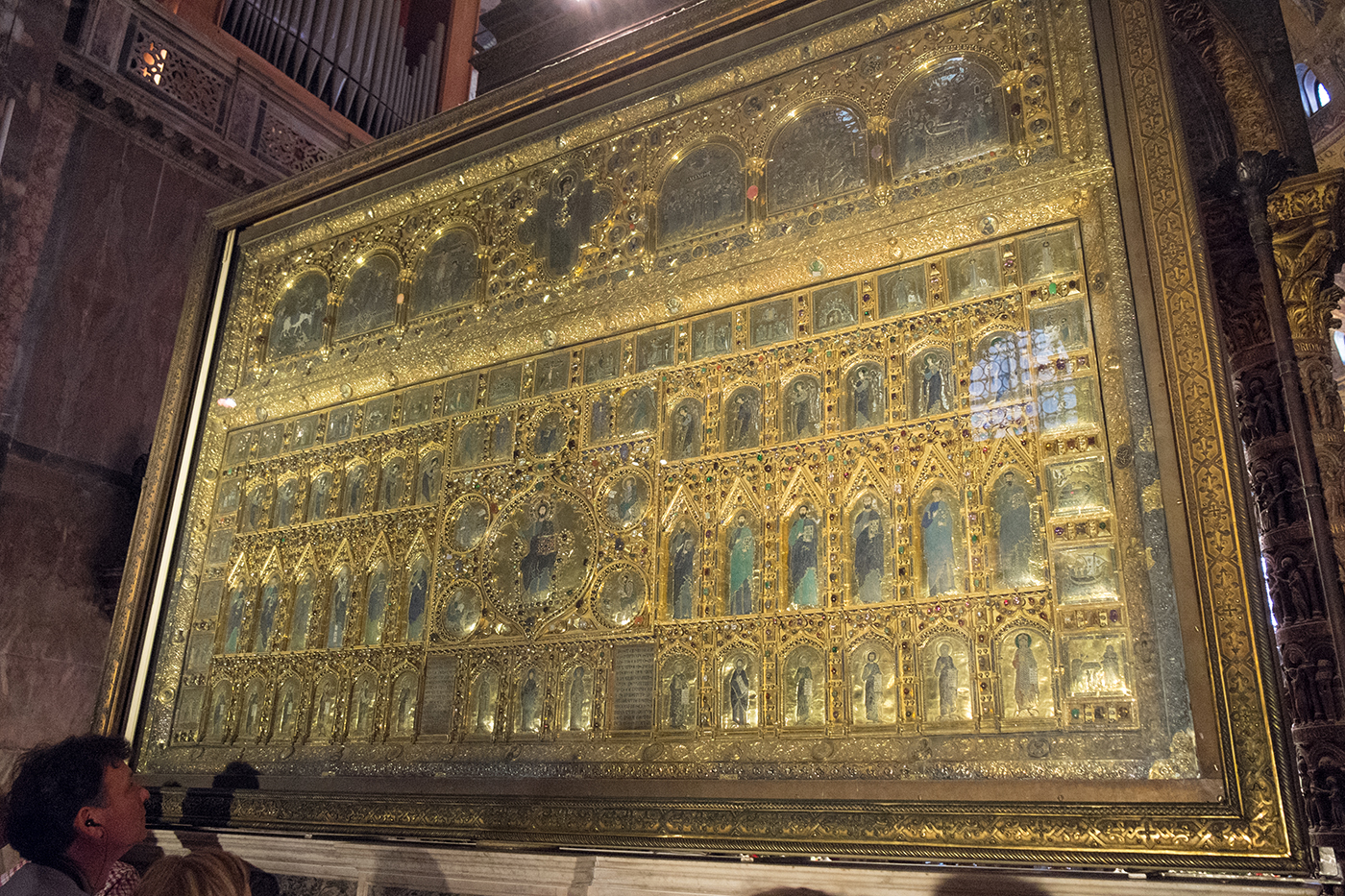 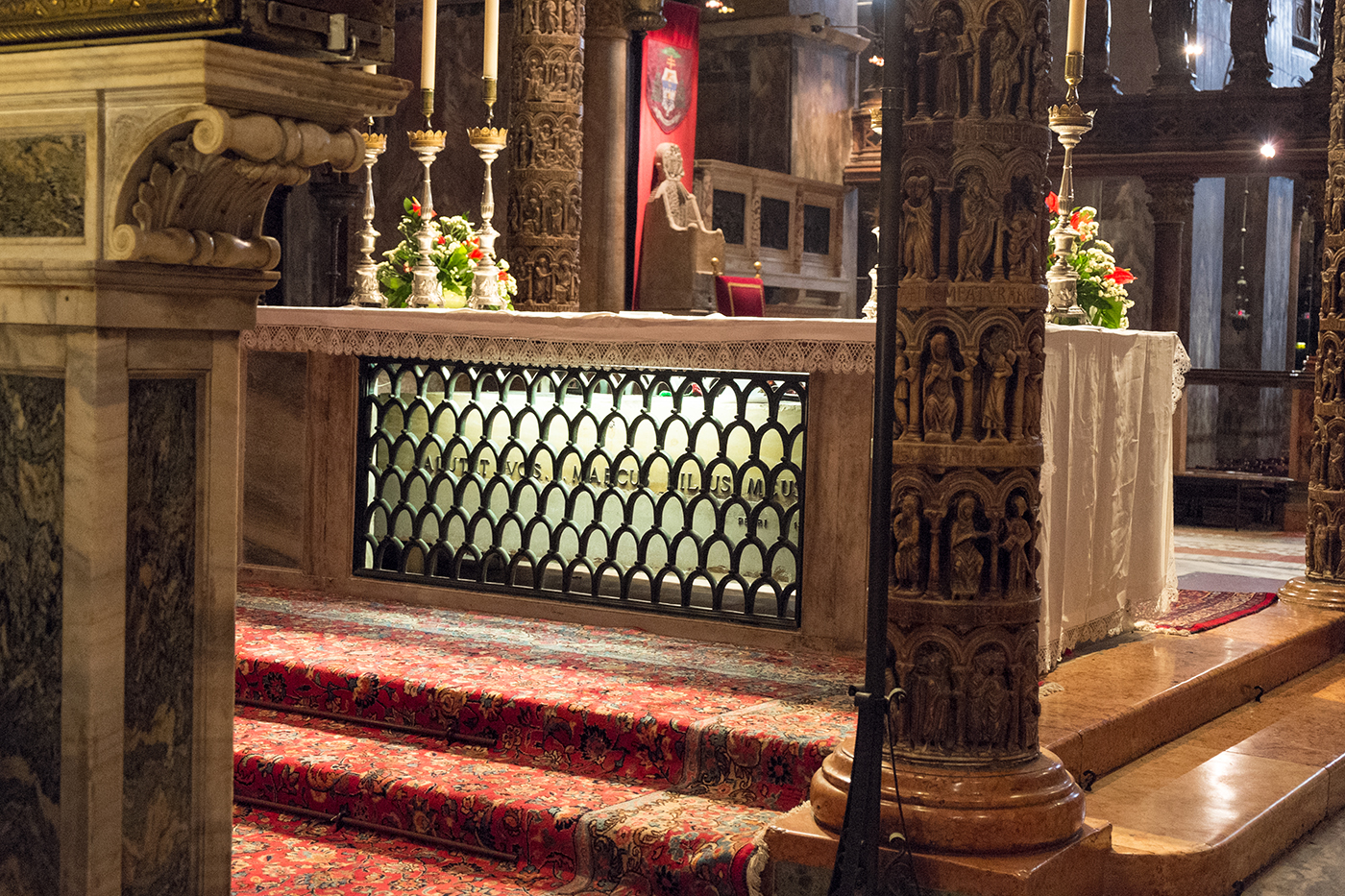 Past the tomb of St. Mark, was the Pala d’Oro and onto the crypt below. This was the first time I had ever been underneath a basilica – it’s cool, damp air, and somber atmosphere, was a unique experience.

When we originally entered and were waiting for them to officially close, we stopped and were able to see this masterpiece – The Cupola of Creation. 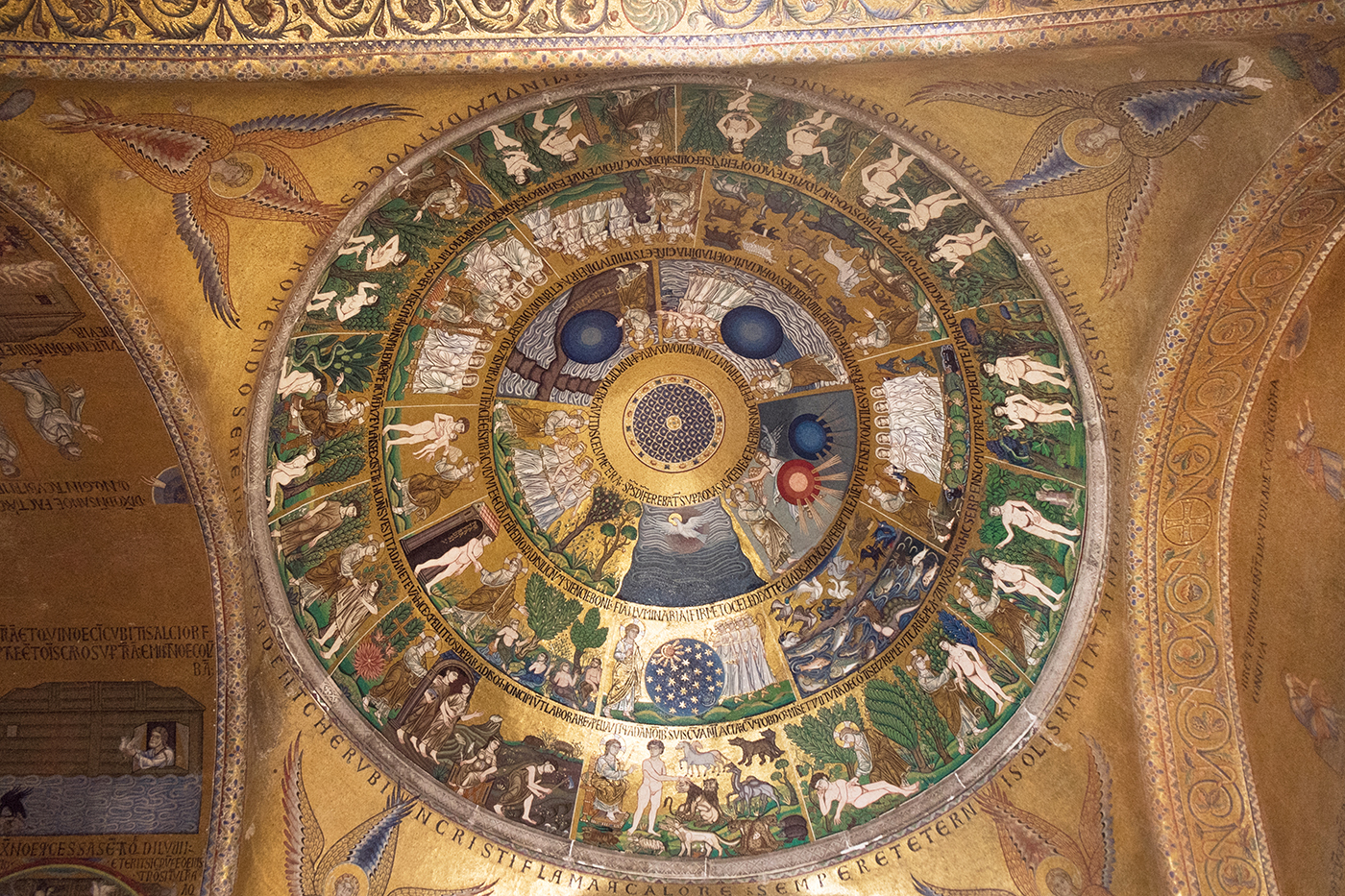 The morning we left Venice was another adventure. It was sprinkling so we wore the plastic ponchos that Mom had thought to pack and headed out. On our way to the train station it turned into a torrential downpour and as we started up the step bridge across the Grand Canal it looked more like a waterfall than a bridge. By the time we reached the station we were soaked through. We paid the 50 cents to use the bathroom so that I could change clothes and use the hair dryer to dry what we could. We bought our tickets the day before but had to figure out how to get on the right train to Florence and once we were in our seats, we could finally relax. 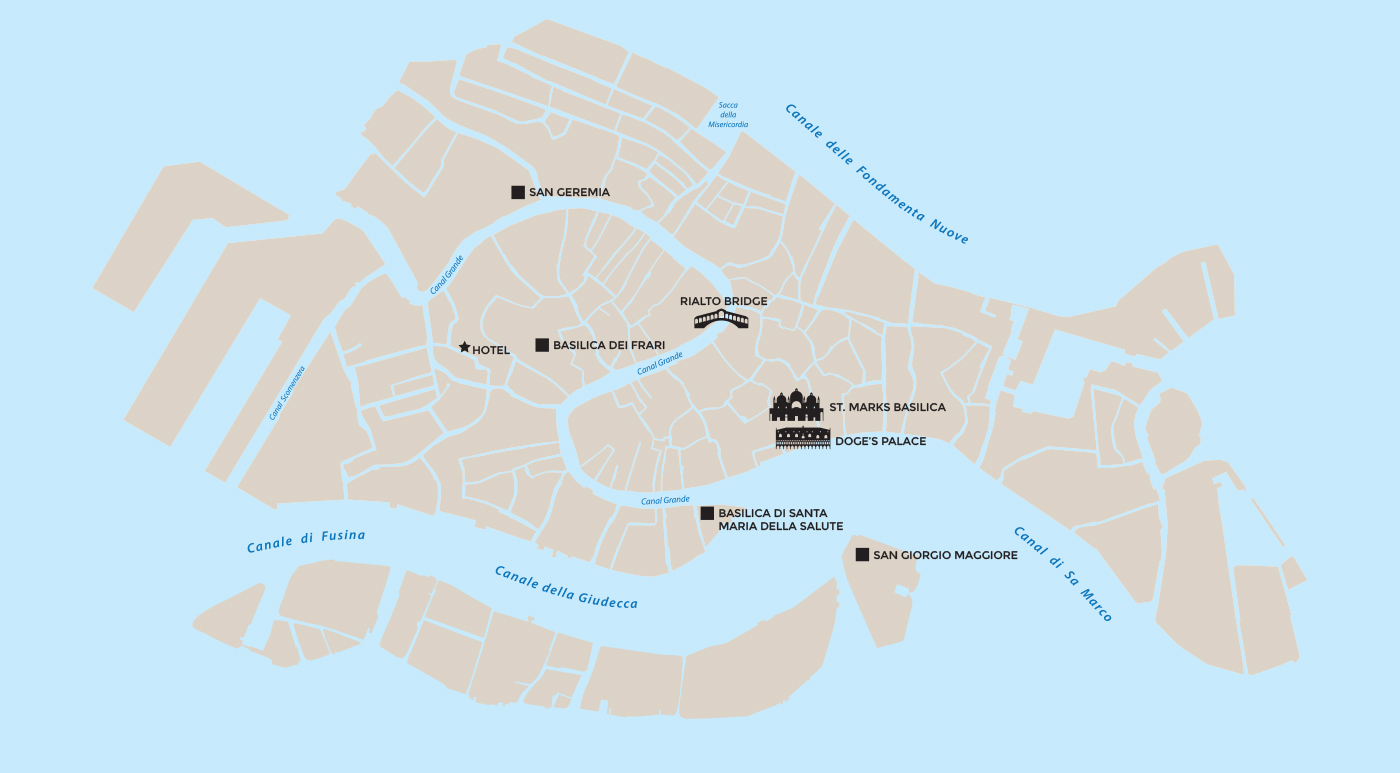 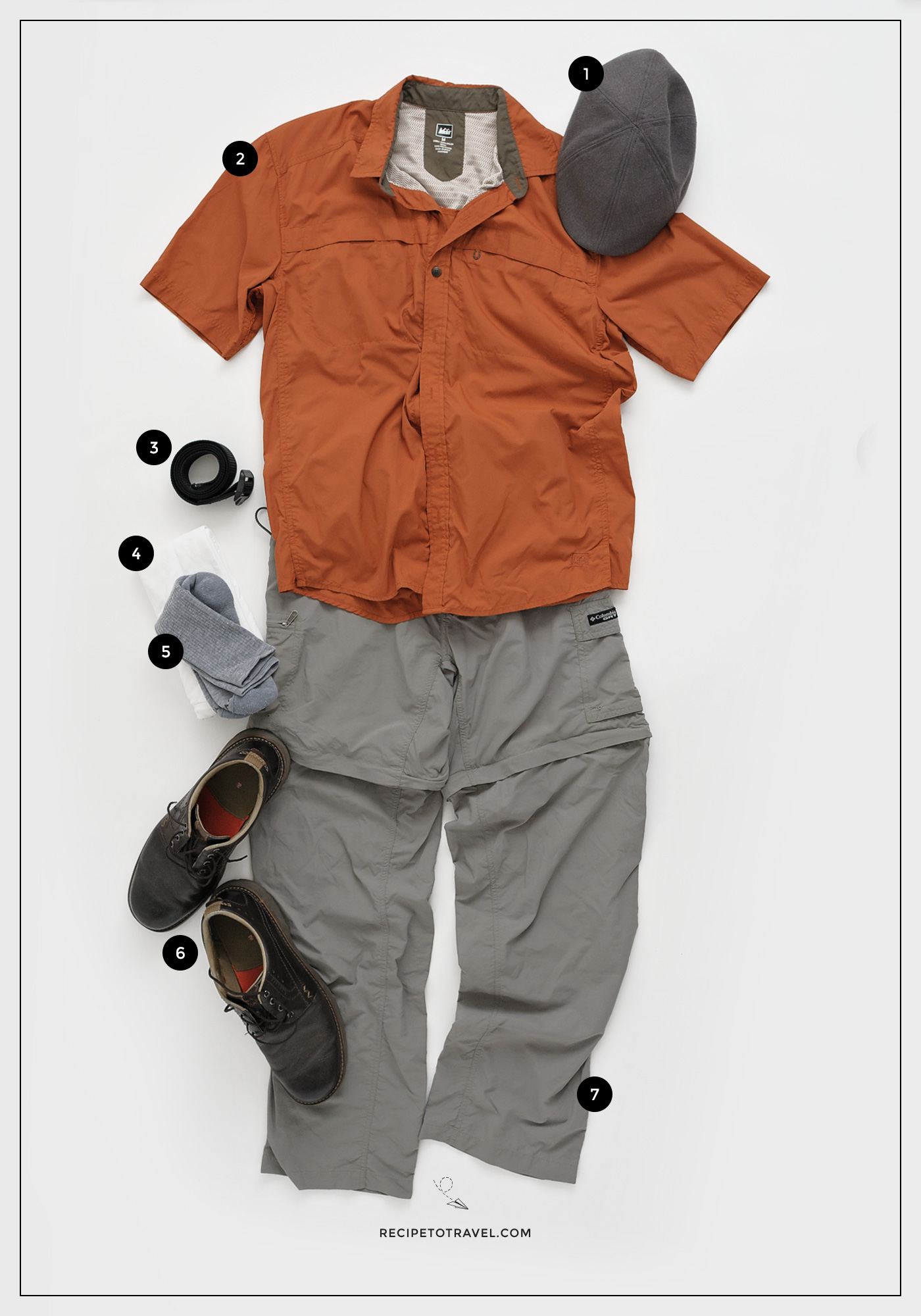